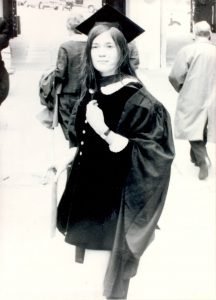 Clare on her graduation day, University of Leeds.

Clare Short was born in Birmingham on 15 February 1946. Her mother’s family had lived in Handsworth for two generations but originally came from County Clare, having left Ireland to escape the Famine. Her father came from Crossmaglen in County Armagh, Northern Ireland. She was educated at St. Paul’s Grammar School, Birmingham and at the Universities of Keele and Leeds where she studied Political Science graduating BA (Hons.).

Prior to her parliamentary career, Clare worked as a civil servant at the Home Office (1970-1975). Here, she worked within the Criminal and Immigration Departments and as part the Urban Deprivation Unit. During this period she also worked as director of both Youth Aid and All Faiths for One Race (AFFOR) which focused on youth unemployment and combatting racism in Birmingham. 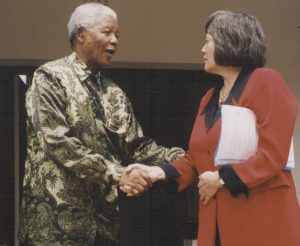 Clare meeting with Nelson Mandela whilst Secretary of State.

Clare was elected to Parliament in 1983 as MP for her home constituency of Birmingham Ladywood. Of her first years in Parliament, Clare recalls that she ‘spoke frequently in the Chamber, worked hard in committees and…took every possible opportunity to challenge a government that was causing great hurt among my constituents’. During the years of Labour’s opposition, Clare served as Shadow Minister for Women (1993-1995), Shadow Secretary of State for Transport (1995-1996) and Opposition Spokesperson for Overseas Development (1996-1997). Clare was a member of Labour’s National Executive Committee (NEC) from 1988-1997 and Chair of the NEC’s Women’s Committee (1993-1996).

For the first time ever we are capable of removing abject poverty, illiteracy and the diseases of poverty from the human condition. The current intensification of global economic integration has demonstrated that there is enough knowledge, technology and capital to bring development to all the people of the world.
Clare Short, 1997

Clare resigned from the Government in 2003 in opposition to the Iraq War. In 2004 she published An Honourable Deception? New Labour, Iraq, and the Misuse of Power which explained the causes of Britain’s involvement in the conflict and outlined how better decisions could have led to a different solution.

As a backbench MP, Clare continued to advocate development causes and hold the Government to account on issues affecting her constituents. In 2006 Clare resigned the Labour whip in protest of the Blair government. She became an Independent Labour Party MP and used this position to campaign against Britain’s democratic deficit and in favour of proportional representation, correctly predicting the 2010 hung parliament. 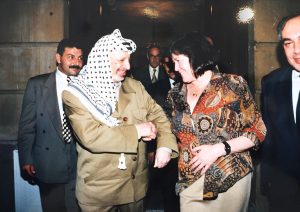 Clare stood down from Parliament in 2010 and since then has worked closely on behalf of the following causes:

In her drive to achieve these outcomes, Clare chairs the board of the Cities Alliance, an intergovernmental advocacy organisation committed to meeting the UN target to abolish slums in cities across the globe and the Welfare Association. She is trustee of Africa Humanitarian Action and patron of the Israeli Committee Against House Demolitions. From 2011 to February 2016 Clare was Chair of the Extractive Industries Transparency Initiative (EITI), which works to improve how countries manage their oil, gas, and mineral resources and to combat corruption.

​Clare is widowed with one son. She lists swimming and her family as her main leisure pursuits.