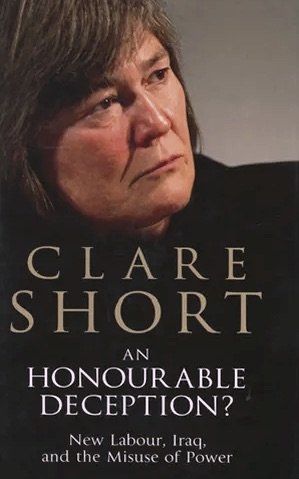 Published in 2004 and winner of the Channel 4 Political Book of the Year Award, An Honourable Deception? New Labour, Iraq, and the Misuse of Power is Clare Short’s riveting personal account of the events leading to Tony Blair’s decision to ally himself with George W. Bush over Iraq, and her subsequent decision to resign from the government.
Well written and offers a disturbing insight into a government where Blair seems to take every decision, not just about war, on the basis of poor information and without consultation.
Michael Portillo, Sunday TimesShort also presents an insider’s view of a much wider malaise: the absence of proper debate and democratic process in Blair’s government. She argues that large unrepresentative majorities have generated an arrogance in Number 10 which is deeply error-prone and has contributed to a failure to understand the real and urgent problems that Britain, and the world, must address.

Passionate, accessible, and written with the honesty and directness for which Clare Short is so acclaimed, An Honourable Deception? is both a searing indictment of wasted power and an inspiring clarion call for change.

In 1986 Clare Short introduced her Private Member’s Bill in the House of Commons to ban Page 3. The size of her postbag the following Monday morning and the vicious attacks on her in the tabloid press (The Sun ran a ‘Stop Crazy Clare’ campaign), made it clear that Page 3 pornography was a heartfelt issue for people of all ages, in all parts of the country and of all political persuasions.
It was the reaction of thousands of women throughout the country that made the debate over pornography significant. I was simply a woman in Parliament who felt as other women do. Together we caused quite a storm.
Clare Short, IntroductionThis is the story of the campaign with a detailed introduction by Clare Short about the issues surrounding the pornography debate, the history of the campaign and what it has meant for her and her family.

Also included are the letters from members of the public (250 from the 5000-plus she received) saying what they feel about Page 3, cartoons, tabloid headlines and a list of how MPs voted.

Read Clare’s Introduction to Dear Clare…This is What Women Feel About Page Three.