Visit to Russia: notes from my travels

Clare offers an account of what she learned about Russian history, culture and politics on her recent visit to the Federation.

I visited St. Petersburg and Moscow at the end of August with a small group organised by The Nation, a progressive American magazine. The visit with a mixture of tourism and very informative talks and lectures. I went because I wanted to find out what people in Russia had to say about the escalating Cold War.

Differences between Russian and American self-understanding 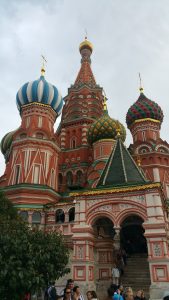 One of our most interesting talks was given by ​Professor Nina Philipova​​. Her title was ‘With the mind alone Russia cannot be understood’ ( This is a quote from Fyodor Tyutchev (1803-73), a Russian poet).  She stressed for example that Putin had once stood on the election slogan of “Vote with your Heart!”. Individualism in Russia has negative connotations. She also said Russia saw itself as unique – the largest territory by head of population and being neither west north east . Even In the 19th century Russians were not allowed to travel abroad for fear that would pick up Republican views. In addition Russia saw itself as the third Rome, in relation to the Orthodox religion.

In the Soviet period the Russian people saw themselves as very special with their belief in equality and hostility to private property. They thought they were the best in the world then saw the rest of the world and suddenly realised they were the worst in the world. She believed this was why 76% voted for Putin. This is a result of a complex of inferiority, after a complex of superiority.

When asked, she said her Russian students valued their writers, their food and nature; her American students valued freedom and privacy. She thought Russians cultured but not civilised. Americans civilised but not cultured. Russians have a sense of fatalism, destiny and melancholy; a sense that life isn’t determined by me but by fate, or god, or the government. Russians can be heroic and want to contribute to the state of the world but aren’t good at improving everyday life. Tolerance and compromise are bad words for Russians. She recommended Joseph Brodsky’s Nobel prize essays.

Dr Sergei Akopov​​ gave a lecture on the tsarist period. In this he told the story of the gradual expansion of the Russian territory as the nation was established. Siberia was conquered by Ivan the Terrible, Peter the Great opened the way to the sea in the north and established the Russian navy. Catherine the Great made conquests southwards opening the way to a warm water port by taking the Black Sea and Crimea.
He also pointed out that after the defeat of the Decembrists (high ranking officers inspired by the French Revolution who attempted to install a constitutional monarchy in 1825), five of the leaders were hanged and the rest were sent with their families to Siberia. So gulags under the Soviets were not new.

Russia’s view of the 20th Century

Misha Smetnick, our learned guide and lecturer in Moscow explained some of the contradictions Russians feel about the Stalin period. Under Stalin, industrialisation progressed, agriculture was collectivised and there was a cultural revolution with music and flowers creating a glittering image of a happy, strong country. All were taught that they were living in the best country. There is still strong nostalgia for the days of the Soviet Union. And yet it was under Stalin that communism became cruel: in order to industrialize he destroyed the old bourgeoisie, then the kulaks, set up the gulags and used slave labour. Fifty million people went through the gulags. And then 1936-38 saw the red terror, when he turned on the generals and other leaders and his cult of personality was established.

The deal with Hitler was made to buy time because Russia was not ready for war. Poland was divided between Germany and Russia and Russia took Latvia, Lithuania and Estonia. In 1941 Germany attacked Russia and by late August had reached the outskirts of Moscow. Stalin recalled some Generals from the gulag and Moscow was saved with great loss of life. This led on to the coalition with Roosevelt and Churchill, and the distribution of supplies to the USSR from the USA. At Yalta in 1945 they agreed the carve up of Europe. Mishas view is that if Roosevelt had lived the Cold War might have been averted. 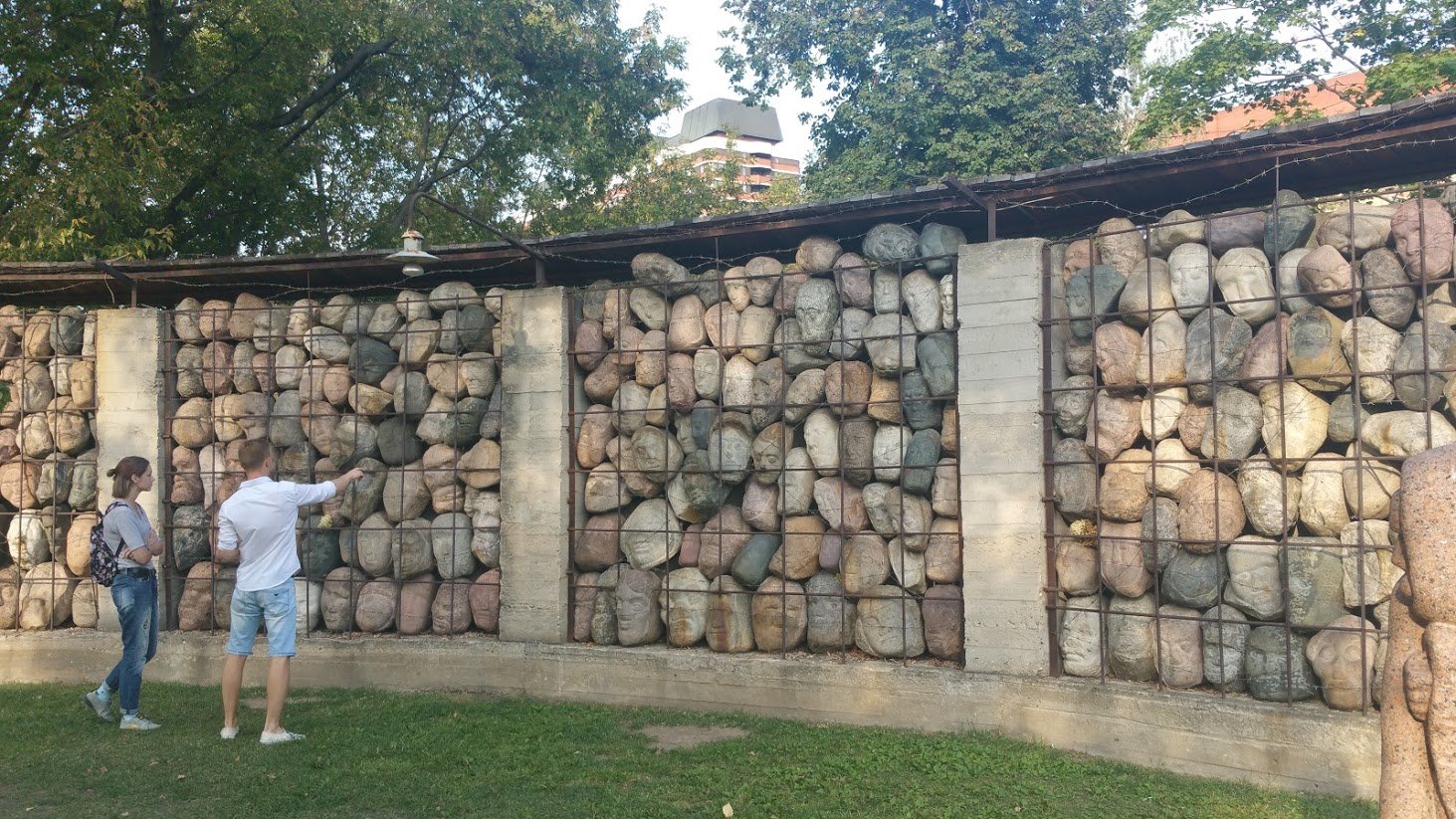 A monument to Victims of the Totalitarian Regime by Ye I. Chubarov, completed in the 1980s.

Stalin died in 1953. Kruschev closed the gulags and de-Stalinised the system. He also developed housing for people and the Soviet space programme of which Russians were very proud. Misha’s view was that Kruschev’s mistakes were the Cuban Missile Crisis, the Berlin Wall and giving Crimea to Ukraine ( which he did to shore up his political support ).

Brezhnev ruled from 1964-82 and Misha saw this as the heyday of communism: stability and stagnation, better flats and cars. By the late 70s Brezhnev was senile and 1979 brought the invasion of Afghanistan. In1982 Brezhnev died, Andropov and then Chernenko lasted only months.

In1985 Gorbachev propose perestroika ( restructuring ) and glasnost ( openess ) . He was initially very popular but he made two big mistakes, his anti-alcohol campaign and his attempt to cover up the Chernobyl disaster in 1986. In addition the economic situation deteriorated. the old communists attempted a coup, then Yeltsin took over. He brought down the Soviet Union in 1991. Half the population and one-third of the territory was lost.

Yeltsin imposed shock therapy on the economy. This led to 2000% inflation and people lost their lifetime savings. This made people yearn for communism. Yeltsin also started the war in Chechnya. In Misha’s view the Yeltsin years were the worst for Russia. Pension values were eroded to nothing. People ate their pets. There were queues everywhere. Privatisation began and cronies around Yeltsin got everything. Mafia gang wars broke out.

In 1996 he ran for a second term and the election was stolen; in reality the communists won. In his second term Yeltsin was a drunken embarrassment. He then handed over to Putin, who was the Prime Minister, six months before his term was due to expire. Putin became very popular because he cleared up Yeltsin’s mess, ended the war in Chechnya, hemmed in the oligarchs, raised pensions and the standard of living and dealt with the mafia. But he also took control of the media and diminished the opposition. In the 2004 election he won 70% of the vote honestly.

Putin gave the Russians faith in themselves and told them “we have chosen good relations with the West”. Estrangement began when Latvia, Estonia and Lithuania were invited to join Nato. Ukraine is half pro-West, half pro-Russia. The West supported the illegal kicking out of the pro-Russian President. Then in the Crimea referendum, 83% voted and 92% voted to join with Russia. War in Ukraine is happening because many Ukrainians want to speak Russian and have their language recognised.

In 2018 Putin was elected again. Before the Crimea referendum his popularity was less than 40% according to Misha. He won in 2018, there may have been a bit of a fiddle but he had the support of the majority of the country. Misha was not a Putin supporter and thought he had stayed too long but he said that the population of Russia had never ever lived as well as it does under Putin. People can travel, the economy is free and life is very much better than in the Gorbachev / Yeltsin years.

Their spokesman very much regretted that relations with the US had gone wrong. He said they would advocate a step by step resumption of communications, as happened with Reagan and Gorbachev. The expansion of Nato and its weapon systems was seen as aggression throughout Russia. The Institute was critical of Russia’s response but thought the West had failed to take into account how traumatised the Russian elite were by the break-up of the Soviet Union.

They saw the priority as preventing a new arms race: both sides should reaffirm that nuclear war cannot be won and should not be fought.